Our last night train was uneventful if a little hot. We arrived in Mysore about 10am and several of our group opted for porters to take their luggage. It was quite the spectacle as they piled 2 bags on the heads, and carried another two in each arm!!

We arrived at the hotel, checked in and relaxed for a few hours. At 4:30pm we departed and had a look around the market. Beautiful goods were on sale: fruits of every kind (including enough banana to feed England); vegetables all piled high in pyramids; spices; flowers for making garlands (as offerings at the temple); brightly coloured powders; baskets; and even long black human hair (yuck!). We walked through taking in the sights and sounds and tried some local oranges. Sweet and delicious. We are always careful to only eat fruit, which has to be peeled otherwise you run the risk of it being washed in ‘local’ water. 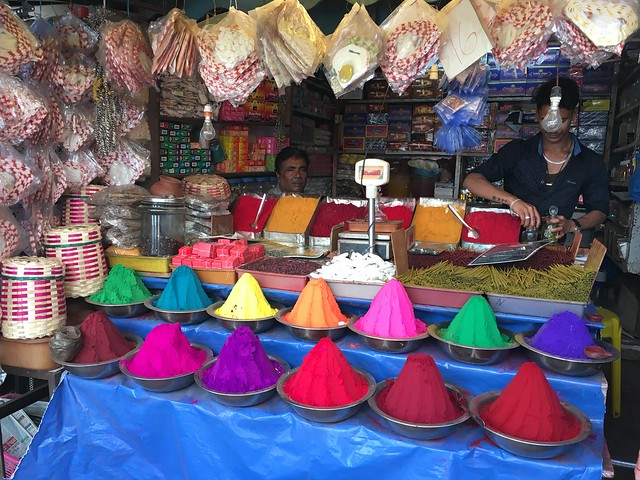 After we then looked around some silk shops and other clothing stores before happening on the meat market. We witnessed several chickens loosing their heads and even some rabbits in cages (waiting for the chop?).

A short tuktuk ride later, we arrived at the Mysore place. It was a Sunday and our guide told us that the light show only happens every Sunday at 7pm for 30 minutes. 100,000 bulbs are used to illuminate the Palace and gates around it and the crowds had gathered.

The Palace was big, bigger than normal and we walked around waiting for the time to tick by. The crowds gradually grew thicker until 7pm. With the flick of a switch the Palace was transformed. Only pictures do it justice, and we stayed and snapped away. The only thing we regretted was not sending the drone up to capture the spectacle. But the amount of cctv and security guards it was probably a good thing. 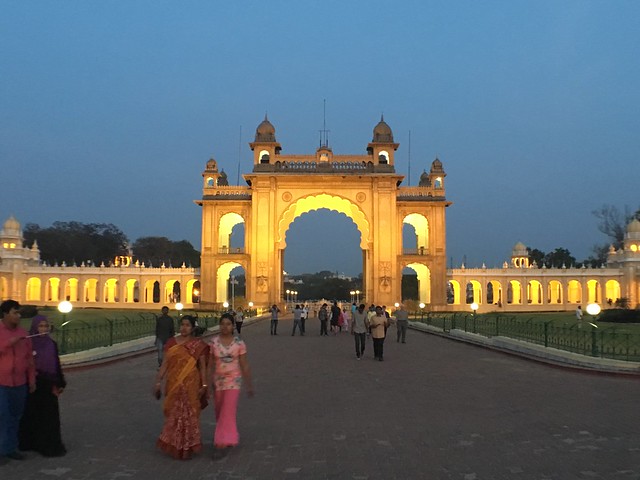 //embedr.flickr.com/assets/client-code.js
We travelled back and ate dinner at a nice hotel round the corner from ours called ‘The Garden Hotel.’ After some good food we slept well. 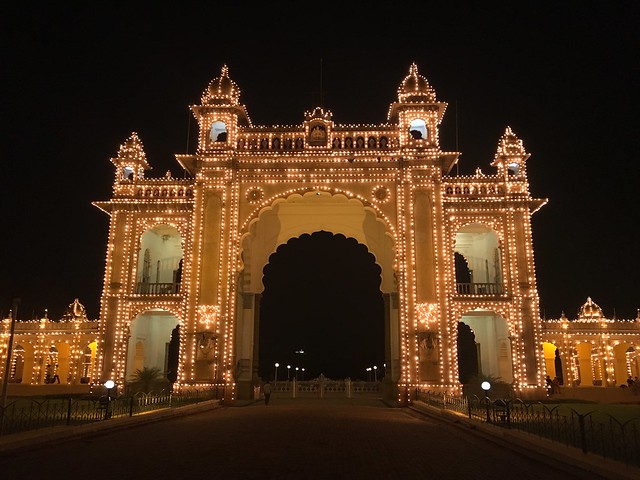 8:30am We were up early to visit the temple on the hill and have a guided tour of the Mysore Palace. The temple was covered in scaffolding, but as usual very busy. It was nice to see Hindus practising their religion. We queued to get inside and witnessed the priests blessing people, offerings being given and chanting music in a precession. As usual monkeys climbed the temple and a local dog barked and chased them.

Then we walked down 200 odd steps to a giant bull Nandi (the vehicle of Shiva) and took some more pictures. 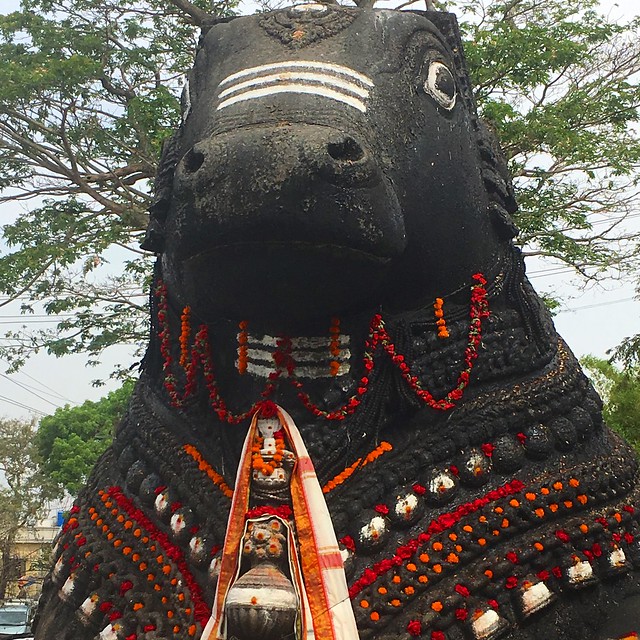 Next up, we had a guided tour of the Palace we saw last night. It was different during the day and slightly less impressive. The royal family of Mysore still live here but parts are open to tour.

Our guide led us through the Palace but it was only built in the early 1900s. Some lovely wood work on the doors and ceilings, as well as some impressive stained glass it was worth a visit.

After some lunch we drove to Madikeri. The so called Scotland of India as it receives 300 inches of rain during the monsoon season, as well as it being hilly and supposedly looking like Scotland (it didn’t). We arrived quite late and went straight to bed.

In the morning, we went on a walk through the coffee plantations- what Madikeri is famous for. We had a local guide who showed us what all the different plants were. It was amazing walking past so many things we eat, yet don’t know where they come from or what they look like. We were shown (among many): coffee beans, pepper, bananas, mangoes, jack fruit, figs, pineapples, cotton, orchids, chillies, curry leaves and poinsettias (the plant/flower used around Christmas time).

The heat grew through the morning and we baked as we walked. Half way we stopped at a local plantation house and were offered coffee from the couple who lived there. My first try for a few years as I like the spell bug not the taste. Not to insult our hosts, I drunk my coffee (with milk and sugar) and was pleasantly surprised. I may well now order one next time I’m in Starbucks or similar. 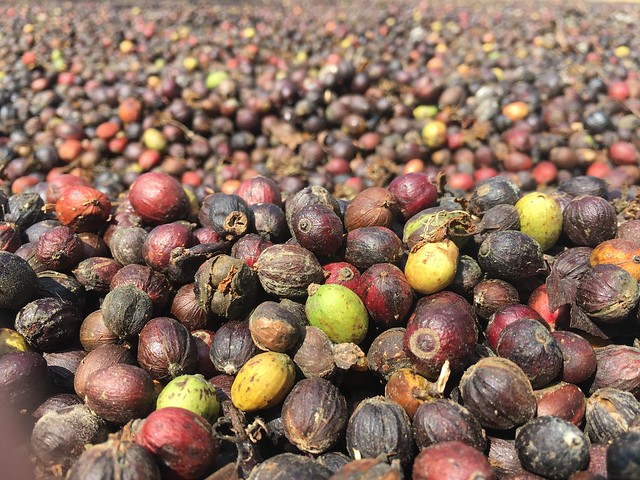 Continuing our walk we walked through some paddy fields and flew the drone, scaring some local cows who thought it was a swarm of bees.

By the time we were finished we were baked and in need of a sit down. Luckily our van was waiting and so was a stall selling water melon. Just what we needed (the lady washes it with bottled water water and cut it up with a clean knife so it was fine).

We attempted to watch a sunset in the evening, but cloud prevented it.

Mysore and Madikeri were delightful, and totally worth of visit. We would next be arriving in Kochi, our last stop in India.