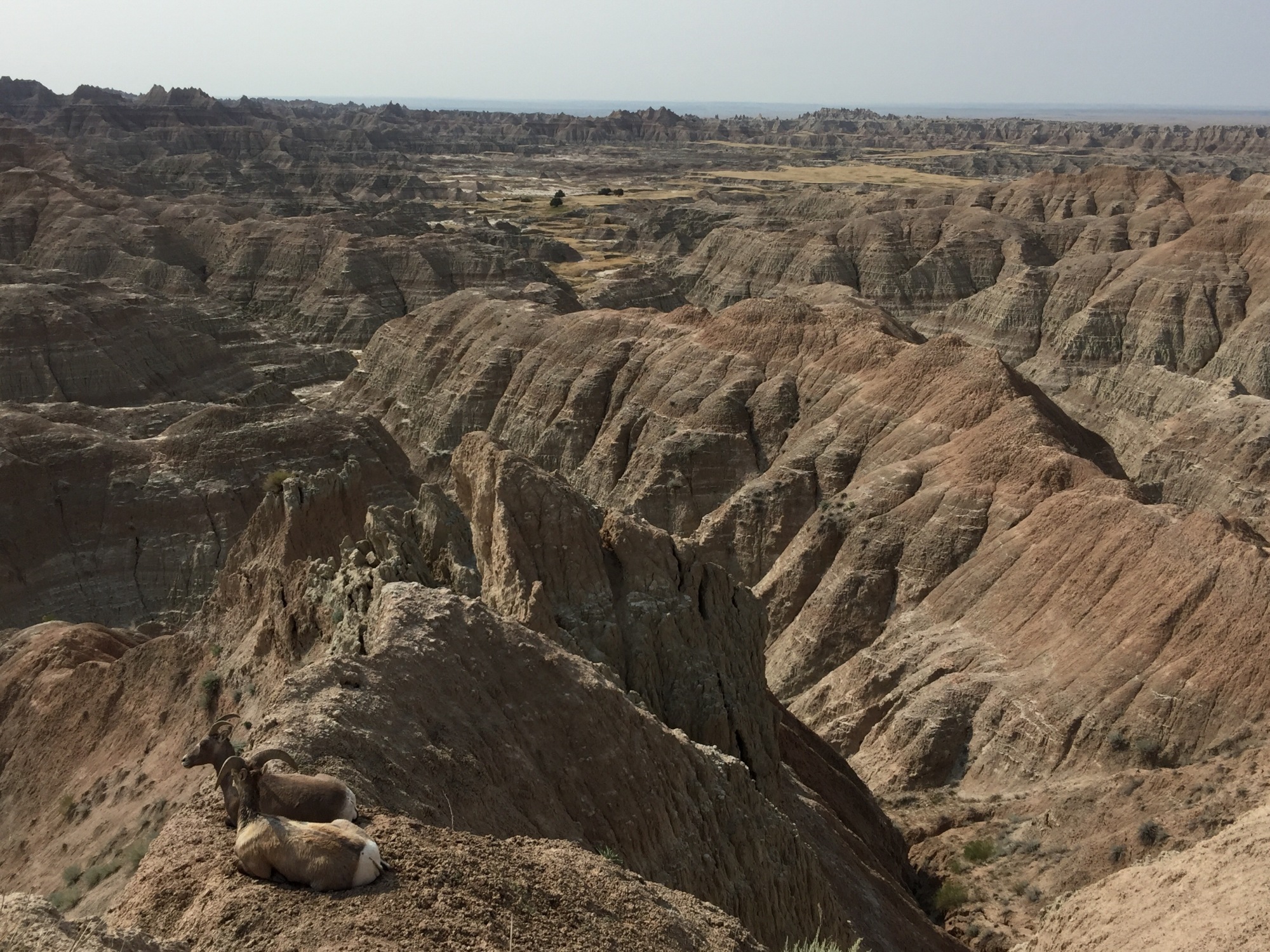 After a last minute decision to change our route to Chicago from Wisconsin and Minnesota to a more southerly route via Nebraska and Iowa – we now had three days of roughly five hour drives coming up. It meant our destination for the night was Sioux Falls in the far eastern corner of South Dakota.

With shorter drive times it made sense to have a later start and we didn’t hit the road until 8.30am!

Our first stop was Badlands National Park, again our Annual Pass got us free access and we drove the short way to a viewing point with dozens of Long-Horn Mountain Sheep that looked more like goats to me.

We parked up next to a biker granny with her rescue dog, Harley who was kitted out with his own leather cap and sunglasses – the irony being they were riding a Honda! After a quick chat and photos, Harley tired of the paparazzi and a few teeth were showed – reluctantly we left the leather clad duo to admire the spectacular views. 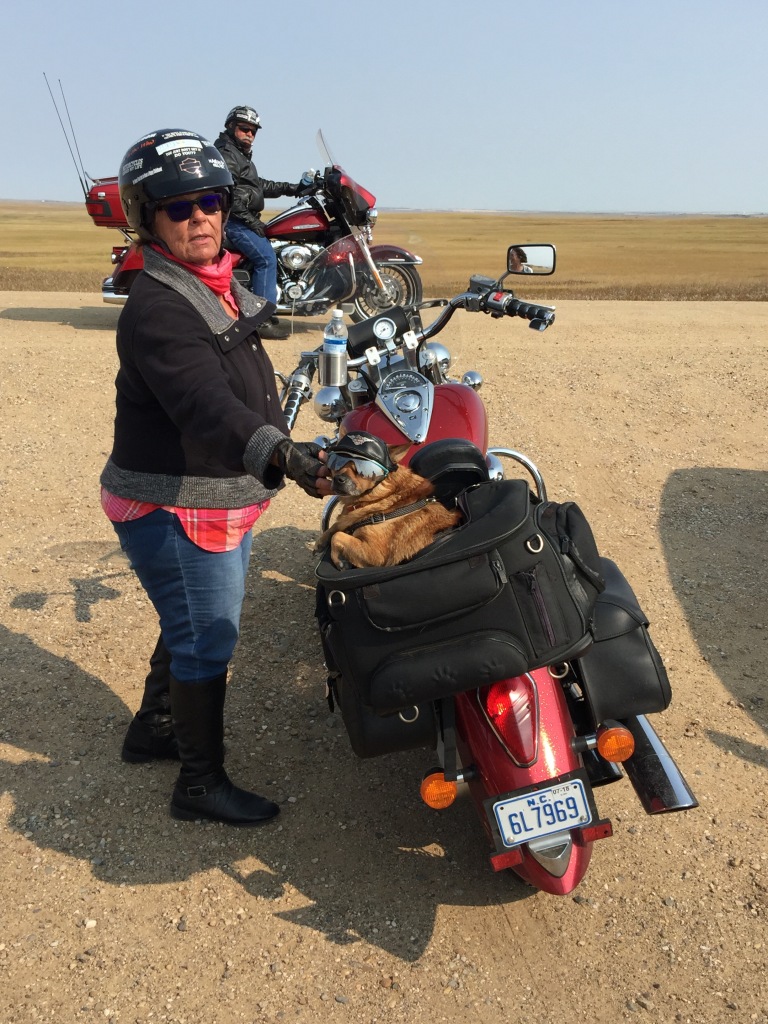 The windswept viewpoint offered spectacular vistas across the badlands with its coloured layered Buttes and hoodoos.

On the cliff edges, the sheep/goats stood precariously on narrow mounds. As we edged closer to take a photo, two tried to move away, in the process one pushing the other off the edge, bouncing between the crevices and reappearing on a lower ledge.

Further up the drive we stopped at a view point looking out over the famous yellow mounds, a series of brightly coloured hills in the valley beneath. 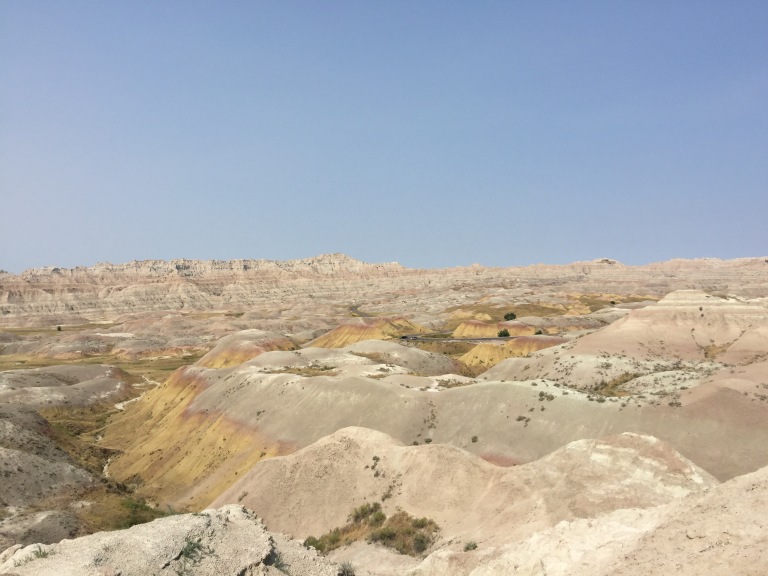 Next stop was the Fossil Trail, a short boardwalk amongst the hoodoos where visitors are encouraged to wandered around, look for fossils and report their location for further inspection by archaeologists.

Our final stop was at the ‘door’ and ‘window’ look outs, the window offering views down into a canyon, while the doors acts as an entrance into a large badlands plateau which has a walking trail. With the midday sun beating down we kept our stops short and after photos set off on the long drive east.

After exiting the Park we stopped in Wall, South Dakota for lunch at a Subway – it was clearly the only petrol station and eatery within a hundred miles as it was packed with lorries, bikers and tourists.

Outside of Wall, we once again hit road works, slowing our progress and making for tedious driving, before we entered farming land – mile after mile of corn, sun flowers and pasture lands. In total it took nearly three and a half hours from Wall to Sioux Falls.

After checking in at our Super8 Motel, we headed into the town centre to see the famed Falls from which the city gets its name.

The Sioux Falls are the centre piece of the well-maintained city park, sitting beneath a railway bridge and consisting of a slower upper falls and a large faster lower falls. Families enjoyed the fading daily light, sat on the rocks watching the thundering falls or laid out with picnics on the grass. 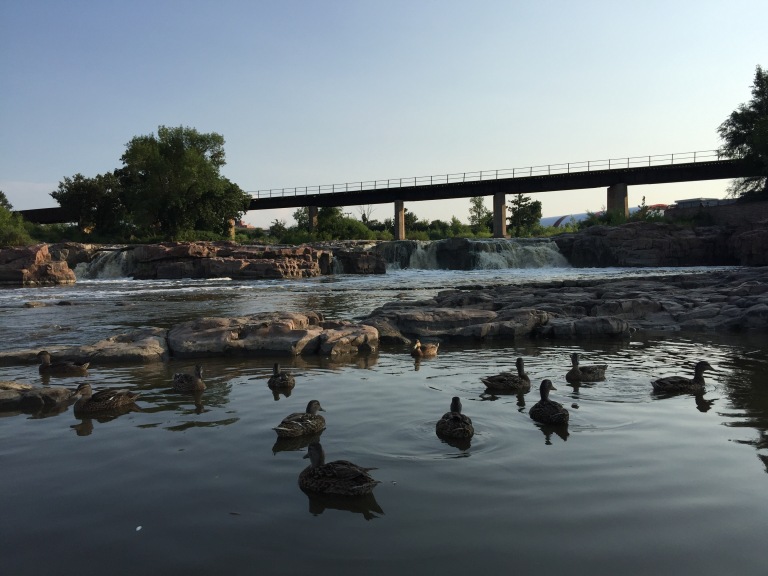 After photos by the Falls we drove in to the Historic District, a small conservation area with a large Cathedral and timber residential houses dating back to the early 19th century.

With evening fast approaching we decided on heading to the Sioux Empire Fair, a local fair with rides, entertainment and farm related activities. A massive American flag flew from a crane above the grounds – this was a taste of real life in the Mid-West – it was also telling that there was hardly a non-white face and we were certainly the only foreigners in town. 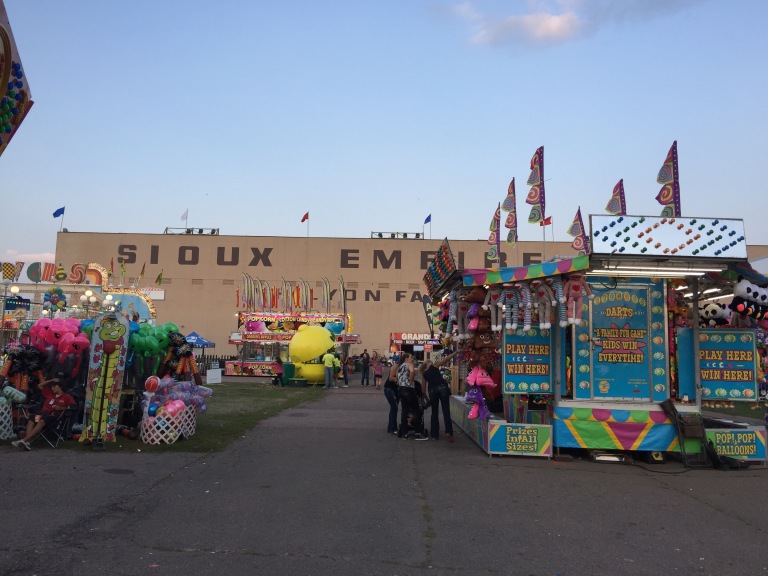 After browsing the stalls and wandering through the animal judging area, where goats, pigs and some freshly shaven sheep were feeding, we headed into the main Grandstand.

For such a small venue they attracted some reasonable acts, the following night it was Alter Bridge – a favourite band of mine. Alas we’d miss it by a night, instead we got ageing rockers George Thorogood and The Destroyers, famous for their 1982 hit ‘Bad to the Bone’ and a string of other recognisable foot tapping hits.

With a few beers and a hot dog in hand it was hard not to get into the swing of things – sunsetting behind the main stage as George belted out the hits and kept the crowd cheering with his rock ‘n roll antics. 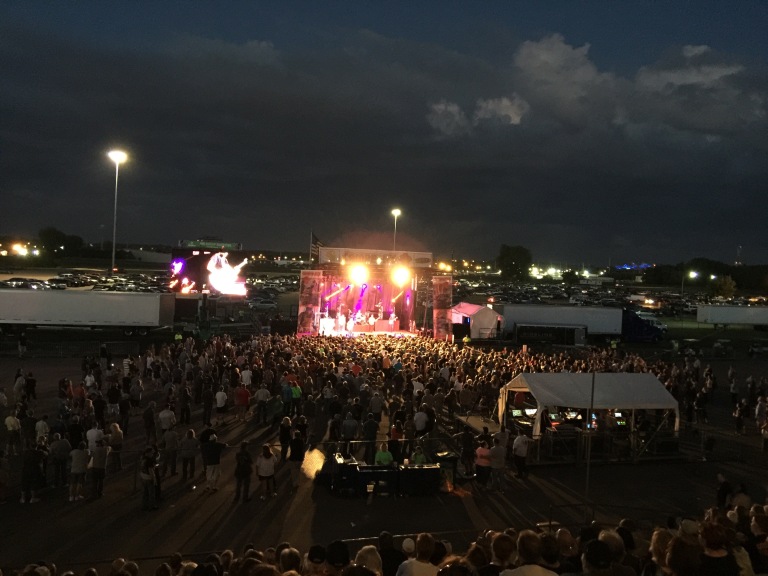 As far as entertainment goes, this must be quite a big thing in Sioux Falls, by our estimates 3,000 or so people were there – around 5% of the population. In truth though, everyone was only there to hear ‘Bad to the Bone’ and when after 90mins George played the rift the crowd cheered and sang along…the moment it finished the crowds began to stream out.

That was our queue to leave – despite George’s best efforts to squeeze out a few more tracks, we’d had our fill of local culture and headed back to the hotel for a well earned rest.