Another Canadian city done, we departed Toronto early via highway 7, a recommendation from our friend Ian. The highway was long and winding through the forests of Canada, small town after small town until we reached Ottawa after 5 hours around 2pm.

The capital city was not much to look at until we got to the parliament buildings. Once parked we walked along the road and around the Parliament buildings. Gothic revival in style it was finished in 1927 and has recently been undergoing renovation.

First we walked up and saw the Supreme Court and then the eternal flame outside parliament. We walked around the building looking at the statues which included a statue of Queen Elizabeth II, former Canadian leaders and the famous five woman (who eventually got woman allowed onto the senate). The parliament also had views of the Ottawa river and bridges crossing the expanse. 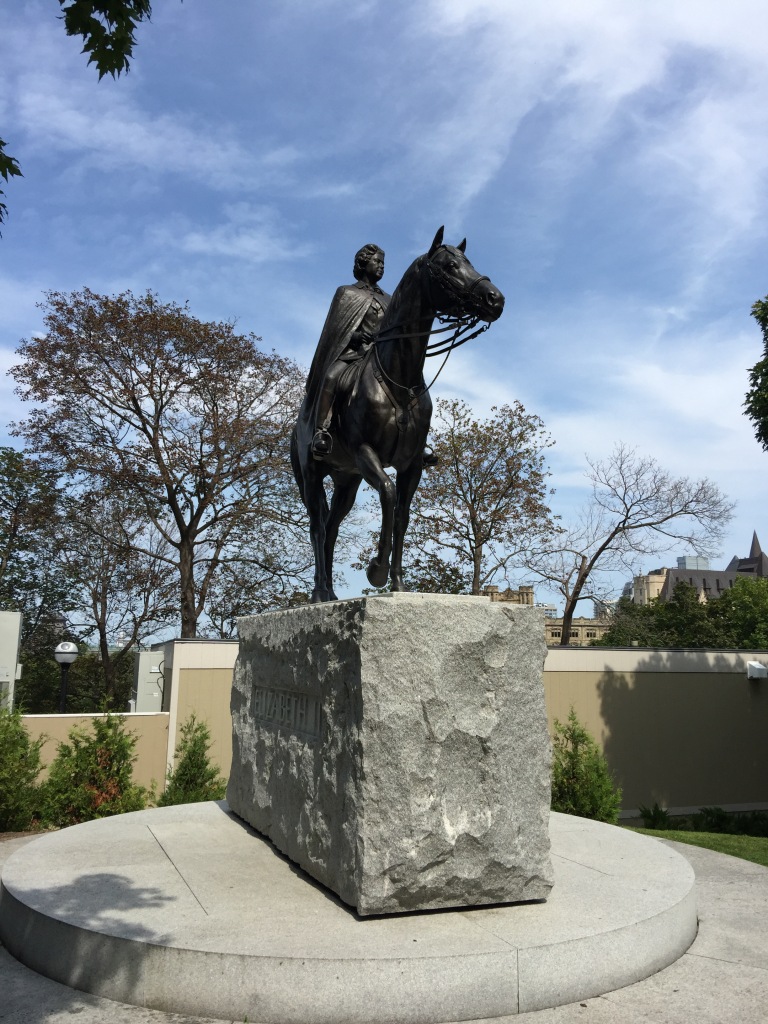 After we saw soldiers guarding the city war memorial; a tall granite arch with bronze figures which also has the tomb of the unknown soldier. The guards stood in the sunshine with their sunglasses on and rifles at their sides.

With the main sights seen in Ottawa, we hit the road and headed the 2 hours to Montreal. As we crossed into Quebec the road changed into French and it was lucky we had a sat nav! The hotel was just outside of the city centre and after a long day of driving we got a dominoes and relaxed.

The following morning we met our friends Denis and Leo at Leo’s place in town. We had met them both in India during our first Gadventures trip and looked forward to catching up. We parked outside the apartment and Leo informed us from the balcony we were parked the wrong way on the street and in front of a fire hydrant! He kindly went and moved the car for us (just as a traffic warden went passed) into garage and we caught up.

They took us round the sights of Montreal for the day. First we went up hill in the city centre park up to the Chalet du Mont-Royal; usually you can see the whole city and the Olympic stadium but the rain and cloud made that difficult. Still we could see most of the city which gave us a good understanding of the layout. 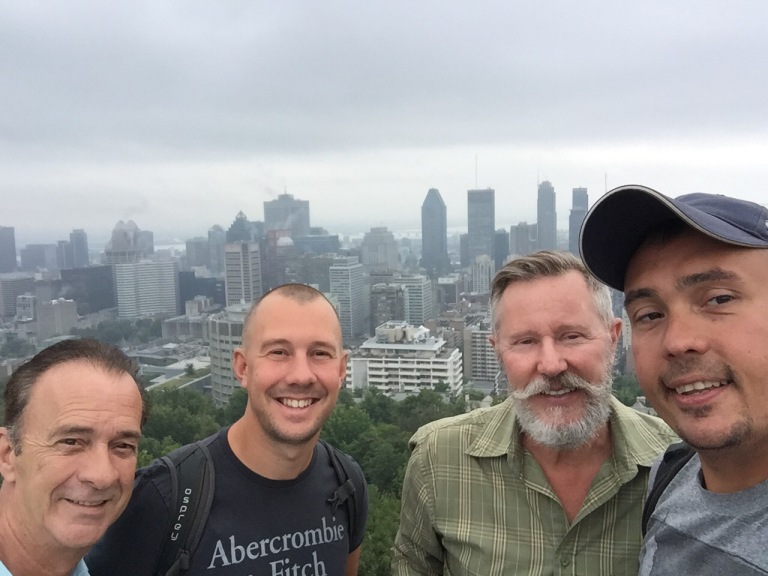 It had now passed lunchtime so we went into town and parked (after 3 attempts due to parking restrictions) and found a popular restaurant that served a traditional Montreal dish: poutine. However there was a half block queue so we found another restaurant across the road. We ordered poutine, fries covered in gravy, with cheese and sliced smoked beef. It was tasty if not slightly unusual!

After we went to a place Leo recommended for bagels and saw Hilary and Bill Clintons car who were visiting the city. From here we drove around the city and over the Pont Victoria Bridge and saw habitat67 a model community built by architect Moshe Safdie for the 1967 Worlds Fair. From this side of the river we could also see the harbour and it looked like a good place for some drone photos the next day.

From here we went back across the bridge and parked in the old city. We were recommended to go in the Notre Damn Basilica built in 1823 famous for its blue decorated interior. It was very impressive inside and the blue and gold shone everywhere. We walked around and took pictures of the candles and decorations.

Another impressive building was the town hall, a replica of the town hall in the city of Tours in France. After walking around and taking pictures we drove a short distance to the village.

The village was decorated for Pride that weekend with a giant flag across the street made of small balls that extended for hundreds of metres. We went for some drinks and the bars we busy with it being pride weekend. 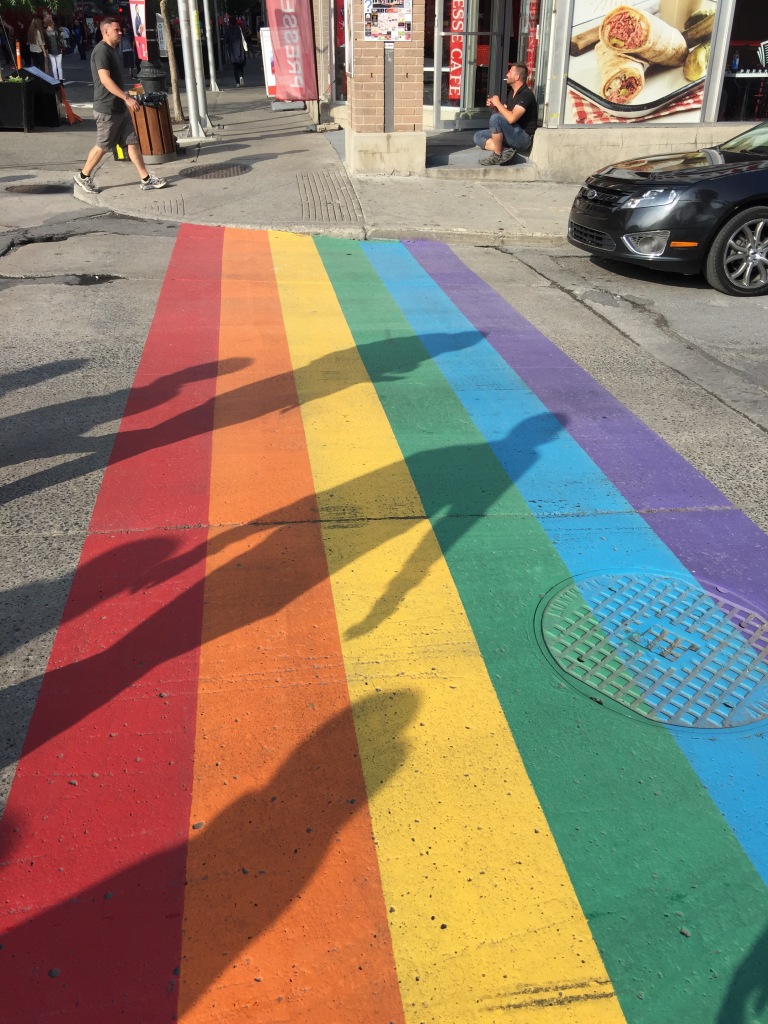 We said our goodbyes to Leo and Denis and thanked them for showing us around the city and headed back to the hotel.

After more recommendations we changed our plan to go straight into the US state of Vermont and instead head to Quebec City as we’d been told it was Canada’s prettiest city.

First we drove through the city and across a bridge to the recreation island of Saint Helene. A theme park, concert venue and and interesting structure called the bio dome lived here. Mike flew the drone from the empty car park and got some shots of the unusual architecture before we drove on to Quebec City.

The drive was about 3 hours and we drove to Levis the town that was on the other side of the Lawrence River to the city. Here we took a car ferry the short trip across as we had been told this gave you best view of the old city. And it did. Built on the side of hill the gothic structures looked out and over the old buildings and winding streets.

The Château Frontenac Hotel was the dominating structure but there were many impressive other buildings dating from the early 16th century. After docking and parking we walked around the cobbled streets taking photos of the impressive architecture and puffing ourselves out on the steep slopes. We walked along the sea front and walked up a wooden path to the old fort and city look out. It was an ideal opportunity for LARS but disaster struck: probably the worst flight so far. 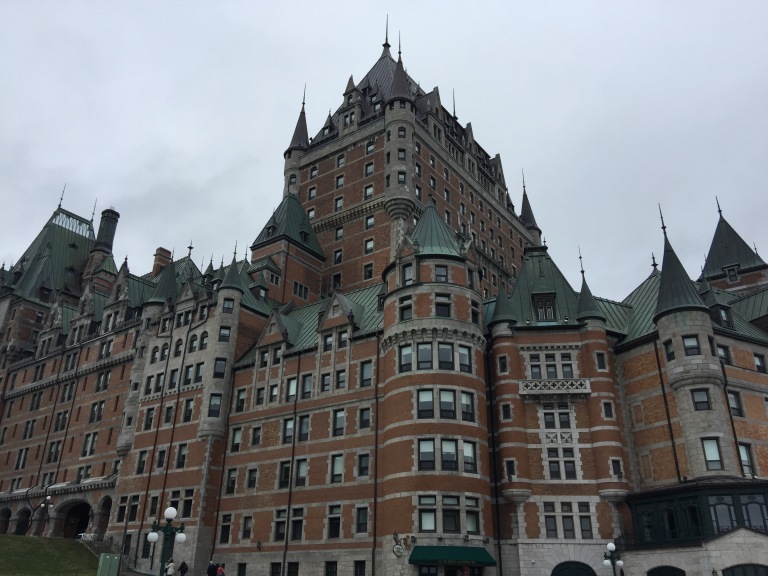 Midway through the flight, while LARS took photos of the Citadel, we lost signal. Usually when this happens it is regained after a few seconds. Not this time. Panicking not knowing if it would land were it was or return to our location; Mike ran to higher ground to no avail. He then dashed off leaving me behind, retracing our steps to get back to where the drone was: about 2km downhill. With no sight of the drone returning I followed with backpacks in tow.

I found Mike three quarters of the way back down the path to city. He had run all the way until he managed to regain signal, and fly it to his location. It appeared from the drone records that it attempted to land itself on the roof of the Citadel, a roof which has an extreme pitch! Luckily no damage was done and we picked up LARS and went for a well earned glass of wine.

We thought it best to make a move after lunch and head south into the US, via Maine.