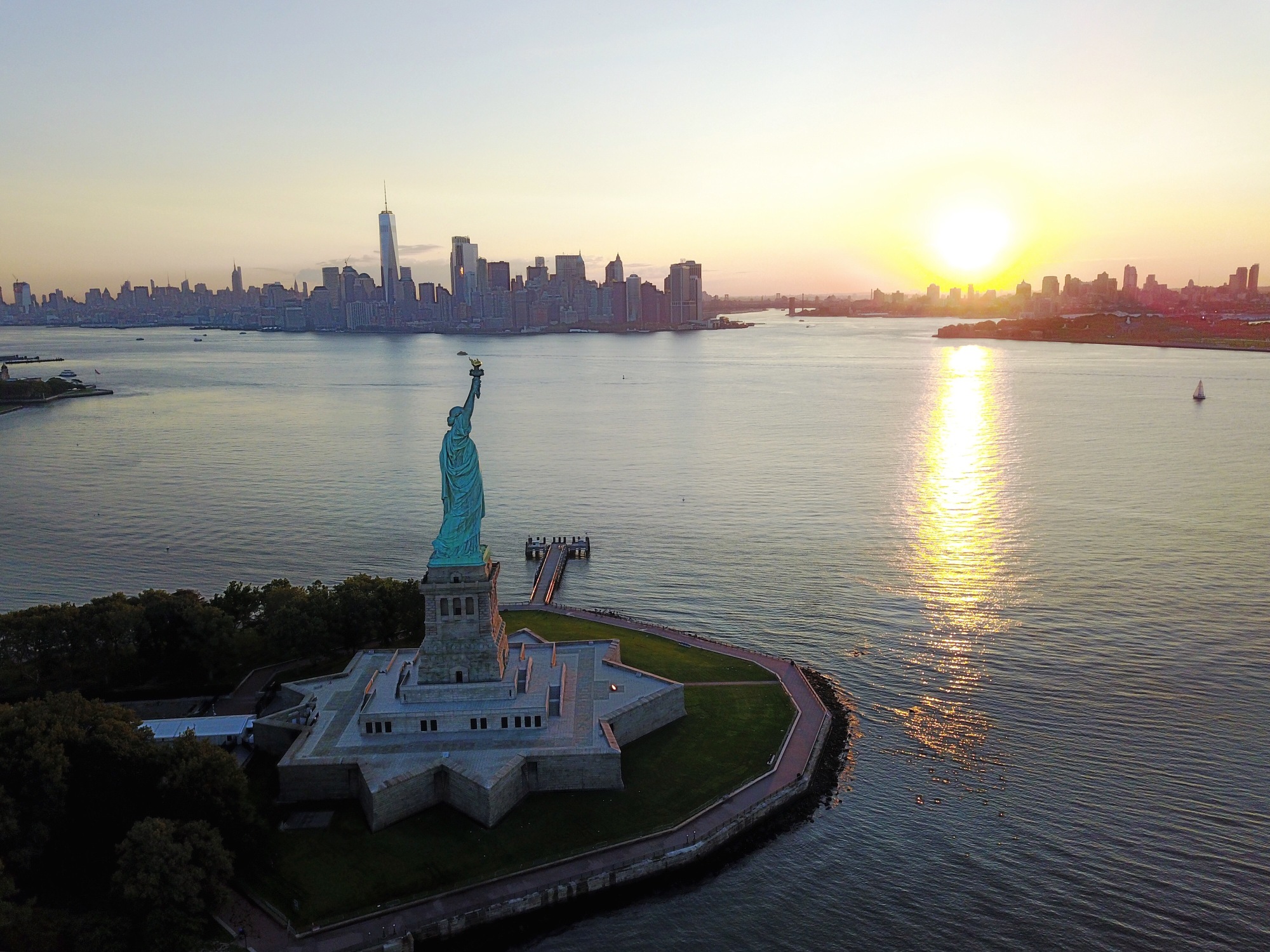 We were up early the following day to visit Liberty State Park. We took an Uber before sunrise through the city and under the Hudson River to Jersey. The park has amazing views of the city and the Statue of Liberty as its far closer to the island than the New York side and you get the city landscape and sunrise behind the statue. 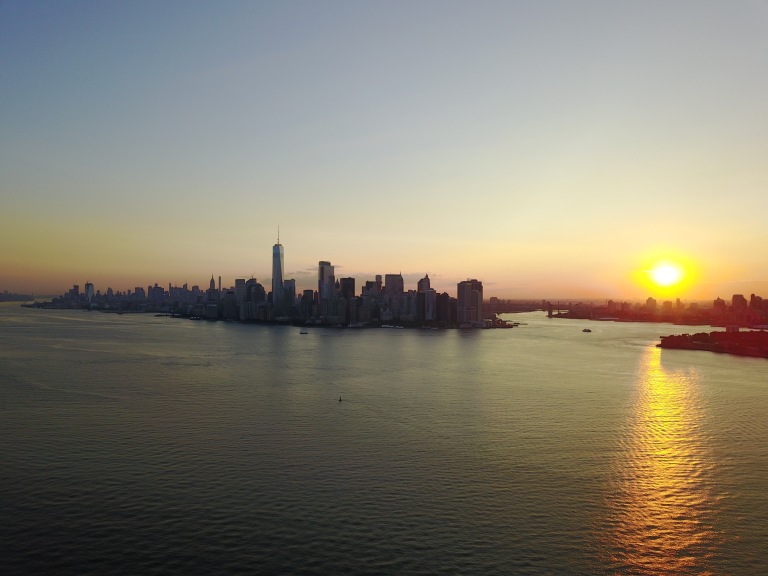 The park was deserted apart from a few joggers and us. We walked briskly along the river edge till we got to a good viewing spot. Here we flew LARS around Lady Liberty and got shots of not just her but the ‘Big Apple’ itself and a few combination shots. 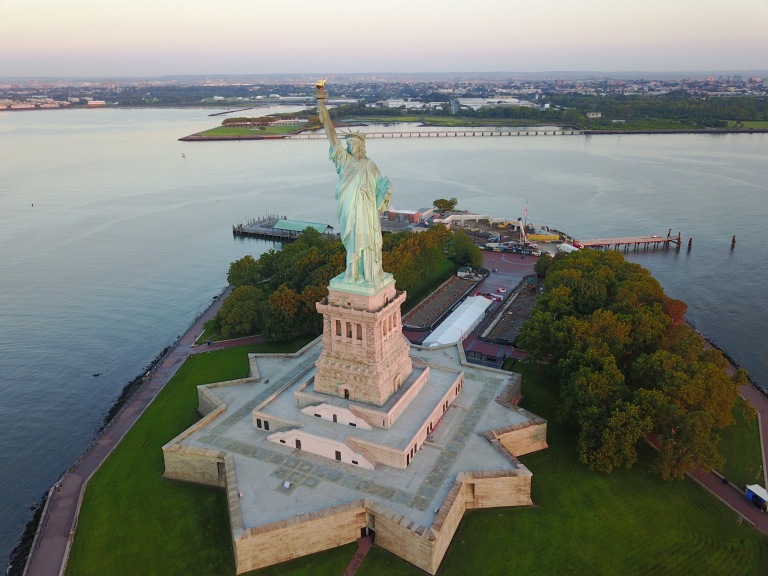 After we finished walked along the promenade till the end and back about 3km in total. Instead of getting an Uber back we decided on taking the ferry across the Hudson. We passed first an old railway building, now a museum, and a memorial to 911. The memorial was to huge grey walls that when viewed from the end looking back on New York looked like the twin towers.

The ferry departed round the corner and we had just missed one, so we waited half an hour for the next. Quite cheap at $7 each, it gave some great views of New York as we sailed across; particularly the Freedom Tower. We got some good new angles without people and other buildings in the way. 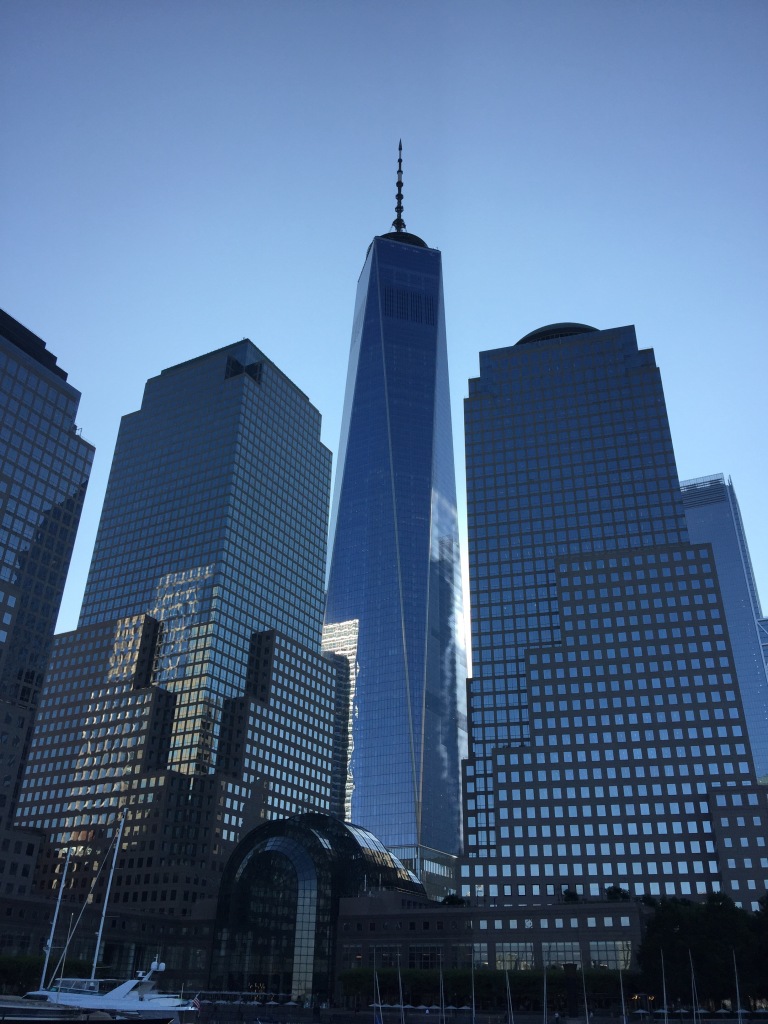 We landed in the finical district and passed a memorial to the Irish potato famine, which wasn’t a bronze statue but a planted field/allotment; quite a juxtaposition to the sky scrappers all around it.

After taking the subway back to hotel we had a sleep and got up at lunch time to go to the Museum of Modern Art or MOMA. We took the subway up town to 77 street station and walked to Central Park to what we thought was the museum. We showed our pre-bought ticket email and the lady informed us we were at the wrong museum: we were at the Metropolitan Museum of Art. Doh!

The museum we had paid for was back in the direction we had come, on 55th street. Undeterred we had a nice walk through Central Park, passed the fountain and fair ground and under and over several quaint bridges. 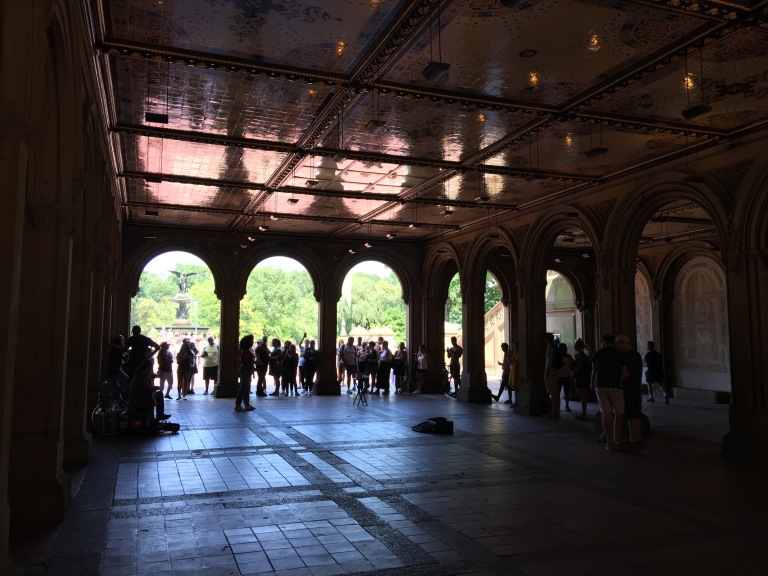 We reached MOMA finally and checked our bags in. The main museum was over 5 floors and contains modern artists and exhibits as well as famous pieces by Picasso, Monet and Van Gogh to name a few. We walked round each floor looking and reading about the different pieces. As usual in a modern art gallery there are some odd things. One that stood out was a canvas painted completely white. Just white. Like a wall. And then hung on a white wall. Art. 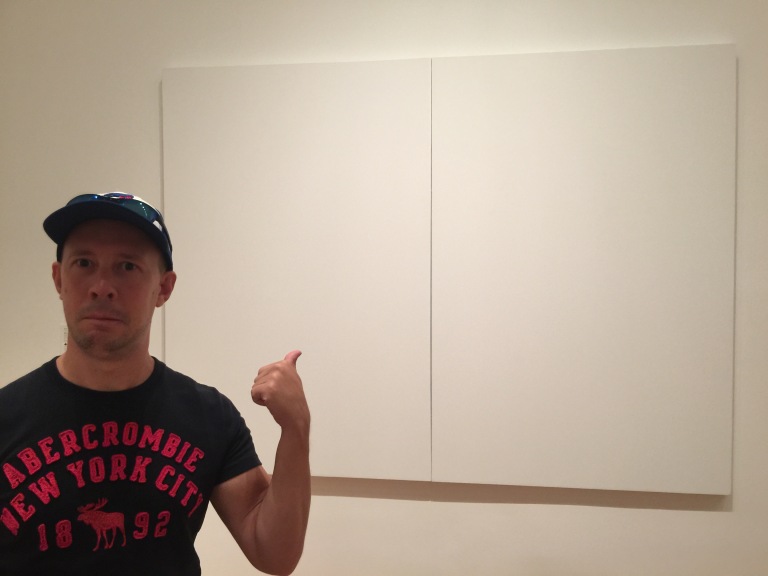 We recognised some well know pieces: Campbell’s Soup Cans by Andy Warhol; Starry Night by Van Gogh; Water Lily’s by Monet; Sleeping Gypsy by Henri Matisse. It was an enjoyable hour or so wandering around especially as we are both fans of modern art. 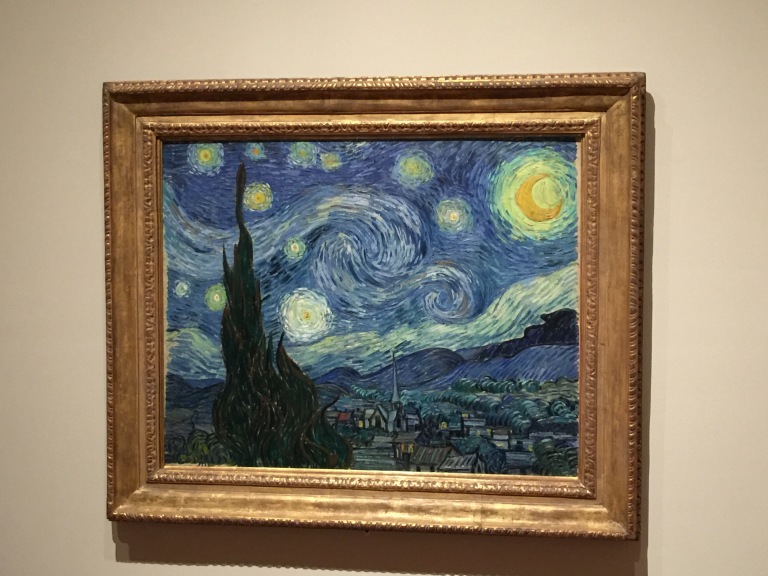 Outside several local artists were selling their works but it was a comic seller who caught our eye. Selling limited editions and rare comics we picked up a few Marvel ones.

Now hungry we looked for a late lunch and as it was national burger day (in the UK) we decided on a burger. After some googling we walked the short distance to the Hells Kitchen neighbourhood. Here we ate at ‘Island Burgers’ and had some delicious sliders, fries and onion rings as well as a local beer. The sliders were all different flavours and we ate satay, BBQ, Mexican and Thai among others.

We had some room service that evening and relaxed before another early start the following day. We got another Uber this time to Central Park as the sun was rising. We found a quite spot and flew the drone over the park to get pictures of the city and park. What became apparent was the scale and size of Central Park, with the drone unable to fit it in one photograph. After we walked back trough the park and went to Starbucks for breakfast. 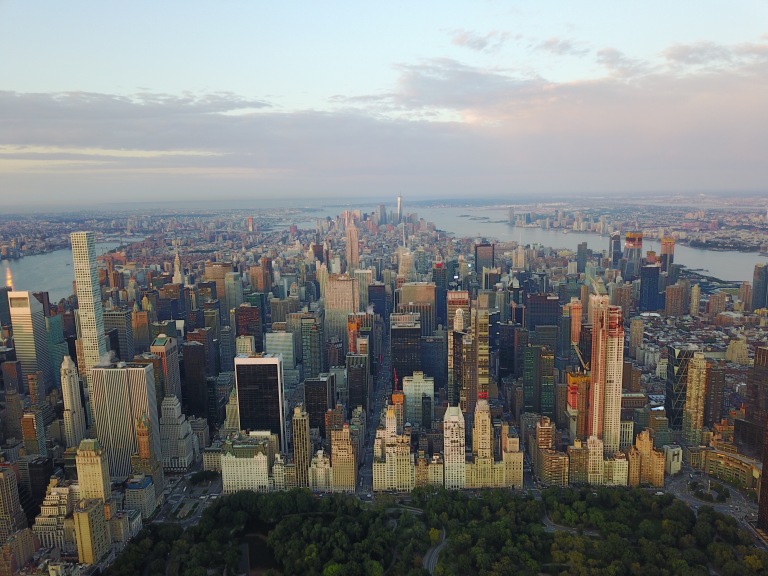 That afternoon we walked the high line which is an old raised railway line that has been turned into a garden walkway. It was crowded but as enjoyable as we remembered it from last time. The planting is now well established and mature and the number of art works along the walk has increased. The walk offered some great views down the streets of midtown along the way and as soon as it hard started it was finished. 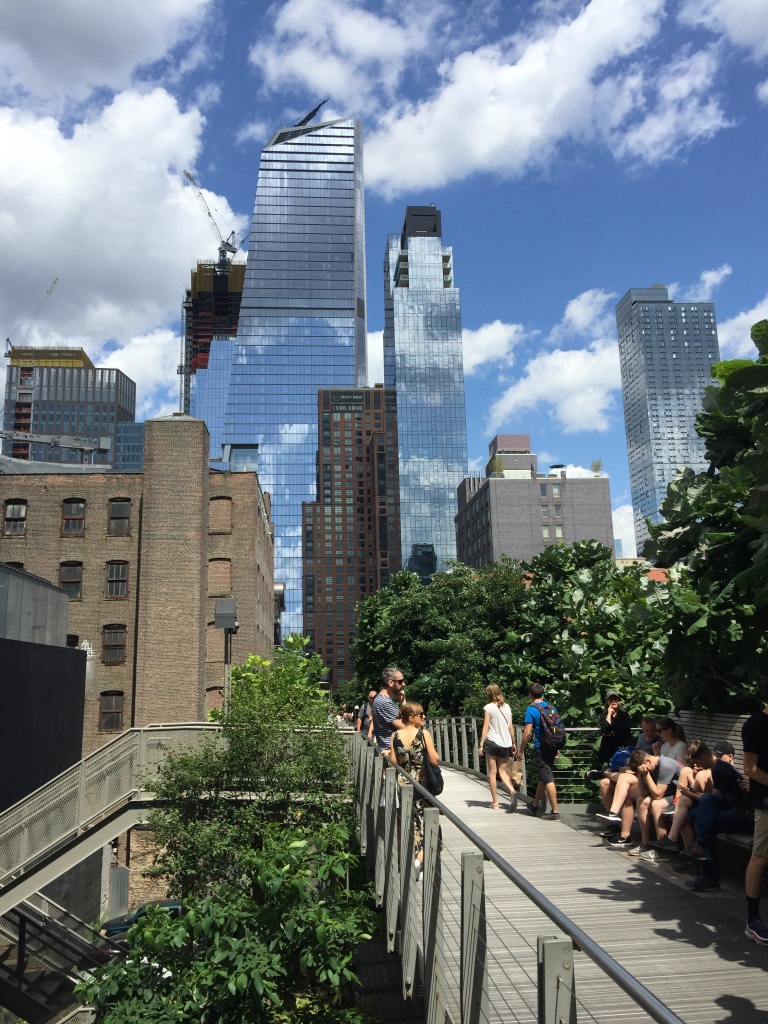 We descended and found a nice Mexican restaurant around the corner for lunch/dinner. The portions were big and we were both stuffed by the end.

From here we did some shopping and picked up some much needed new t-shirts each. Wearing the same clothes for 8 months was taking its tole!!

In the evening we walked around the city taking pictures at night of Time Square, the Rock, Radio City and the Empire State. Both tired we got some sleep as we knew we wouldn’t be getting much the next couple of days in Iceland. 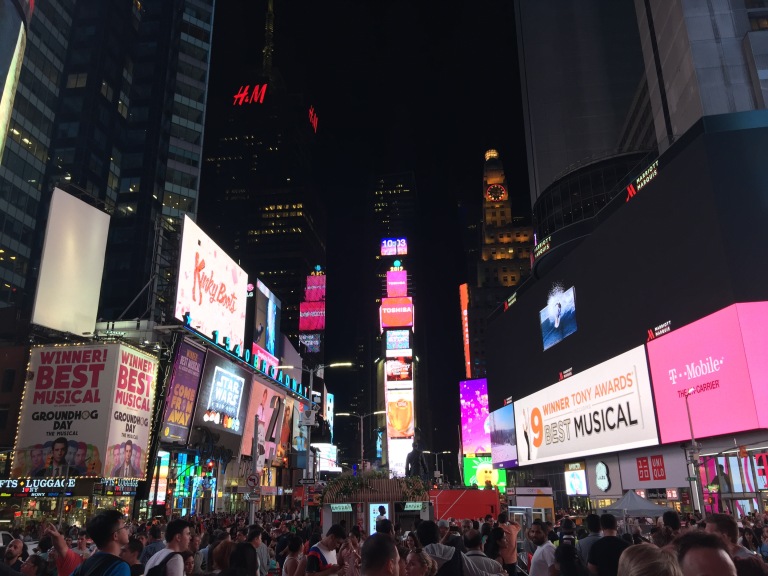 The next day we checked out at 11am but our flight wasn’t till 8:40pm so we had some time to kill. Mike used the hotel wifi and got the next part of his travels sorted in Kazakhstan (which he is doing without me; while I go back to work!).

I travelled downtown to the Freedom Tower and went up the observation deck or ‘World Observatory’ as they called it. The queue outside was long although the security guard said buy your ticket online and you can go straight in. So within 5 minutes I was in and through security waiting for a lift.

​​
The lift was impressive, as it went up all 4 sides showed what New York looked like hundreds of years ago and showed its transformation into the city it is today. Then we were led into a theatre of sorts where I watched a brief film showing all the amazing sights of New York. It ended with the screen lifting and revealing the view of Manhattan island. Stunning.

You were then guided through to the observation deck via them trying to sell you their iPad app so it could explain what you were looking at (as there are no signs). Finally I got to the 360 degree observation deck and was able to take pictures of Manhattan from every angle. Time lapses came out particularly well, especially of the traffic going over the Brooklyn Bridge and the ferries and boats crossing the harbour around the Statue of Liberty. Three loops of the view done, I descended and walked around the city myself, keeping my inner child happy by catching Pokemon on Pokemon Go.

With a few rare ones caught I met Mike back at the hotel and we took the subway to JFK. The journey was about an hour but way cheaper than a taxi. Our flight was on time, and it was off to our final country of our travels together: Iceland 🇮🇸