My transfer from Bishkek to Dushanbe was straightforward – simply a matter of patience and biting my lip at the total lack of queuing or personal space as people pushed to the front at every part of the travel journey.

Checkin, security, passport control, boarding, disembarking, customs and baggage collection all turned into a survival of the fittest scrum!

I met my local guide and driver in the arrivals hall and headed into the capital Dushanbe. The city, which was previously known as Stalinabad until 1961, has an official population of around 850,00 out of a national population of 8.4m, sits at an altitude of 850m and is surrounded by mountains.

The drive from the airport took use through fertile agriculture fields, filled with orchards and crops. These flat fields are something of a rarity in a country with 93% of the country covered by high mountains, although the heavy year round snow means it is water rich and supplies 40% of regions water.

The economy is based 60% on agriculture – mainly wheat and fruits, with 40% from industry including gold, silk and aluminium.

As we entered Dushanbe city a few things became strikingly obvious – the distinction between the poorer rural areas, the immaculate buildings and streets and the near endless billboards, murals and banners bearing the picture of President Emomali Rahmon.

Rahmon, who came to power in 1994 after a bloody civil war has recently rigged the constitution giving himself the title Leader of the Nation and scraping presidential term limits meaning he can now lead until his death.

Driving down the main road the people looked overwhelmingly happy and prosperous – hard to believe in a country which has seen a million people facing famine in the 21st century and where over 50% live under the $1.90 per day poverty line.

Still Dushanbe appeared wealthy and peaceful, massive construction projects springing up all over the city – although I was soon to learn these were all new government buildings or palaces. I guess it’s easy to be happy if you’re part of the city elite and living off the back of others hard work.

As I probed about the government, the one party state and suppression of the opposition and media the response was to be expected – the President had made Tajikistan famous and respected the world over. It had apparently also been voted the happiest country in the world, the best tourist destination and Dushanbe the safest capital city in the world…

All were of course invented by the regime to promote the supposed good work the President is doing on the international stage. What the President has been delivering is ‘gifts to the nation’ in the form of new amphitheatres, stadiums, tea houses, parks and playgrounds…all of which I was to discover sit empty and unused.

Our first stop was the Botanical Garden, certainly more colourful and well maintained than the one in Bishkek but drab and lacking an educational significance compare to those in the West. The prized collection of a 100 or so peacocks all live in a tiny cage rather than free to wander the Gardens – an apt metaphor for the people of Tajikistan.

The stroll through the rose gardens, past intricately carved was eerily quite until we met a ground of high school children, relaxing in the park and taking selfies. Ignorance of the troubles of the country they live in must be bliss.

From the Botanical Gardens we headed to the Statue of Ismail Samani an ancient ruler from the 9th century who since the end of Soviet rule has been elevated to a culture icon. The Tajik identity and culture has today been inextricably linked to Samani and statues of him are everywhere…usually with a banner featuring Rahmon alongside.

At the top of the statue a crown of wheat sits. The name Tajik means ‘people wearing the crown’, which is symbolised in many of the countries monuments which depict a crown and seven stars representing the seven regions of the country.

After photos we took a walk through the open Rudaki Park to a statue of Rudaki, a famous ancient Persian Poet. Above the statue towers one of Tajikistans most famous landmarks – the second tallest Flagpole in the World! On our travels I’ve seen a fair few Flagpoles and to be honest I was slightly underwhelmed – I’m sure other dictators have way bigger poles than this one! 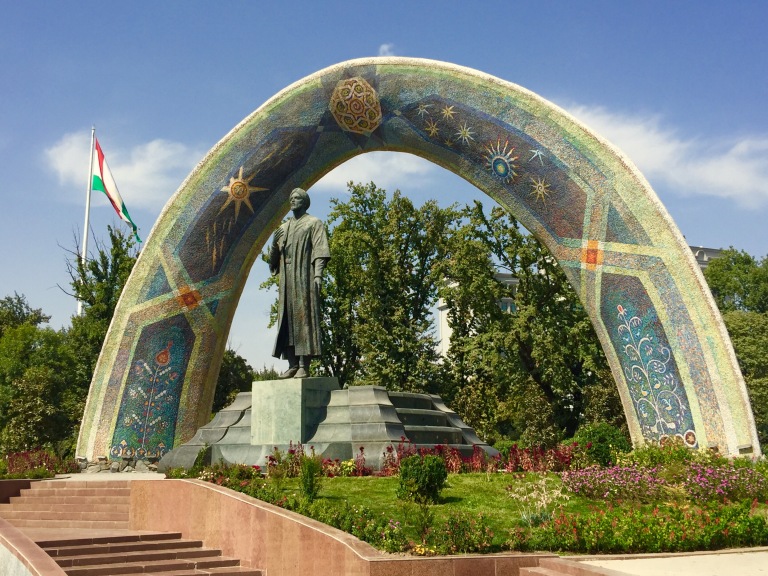 A short walk away, at the bottom end of the Park is the new presidential Palace of the Nation – another obscene tribute to the President power and utilitarian authority.

At this point I asked about flying LARS and the need to post it to Kazakhstan to avoid the strict customs ban in Uzbekistan. My guide quickly informed me that drones had been banned in Tajikistan in 2016 – she made a hurried call to her friend in the KGB (yes they still call it that) and confirmed that they were totally banned. The next piece of news was even more disastrous- despite having done my research and checked their website the day before, it turns out DHL and all foreign courier companies had been shut down by the government about five months earlier.

The result was that I had almost no way to get LARS out of the country and new I risked a $10,000 fine, confiscation and detention if I was caught at the Uzbek border with it.

The only option left open was to try and use the local postal system. Like every building in Dushanbe the outside of the Soviet era building was exquisitely maintained and painted in vibrant colours – the law stating all buildings have to be repainted every year or two.

We entered the building into a series of stark run down rooms, with women sat behind Soviet era counters with no sign of any technology you’d associate with a modern postal system. After some discussion and showing them LARS it was agreed that it could be sent minus batteries for $100, although I couldn’t be seen tonne handing over the money – it all had to be under the table. And so, reluctantly I said goodbye knowing full well I’d likely never see him again.

As we climbed back in the car I reflected on how odd it was that I felt so connected to an inanimate piece of electronics – so much so that I felt like I’d lost a friend.

Looking out the window I also started to realise how almost all the functional commercial and residential buildings were from the Soviet era – the only new buildings were government offices or Palaces.

Our next stop was lunch where I was soon to discover just how important food is in the local culture. We ordered huge bowls of salad, breads, fruits, soup and the local Plof dish – a heavy rice, carrot and meat dish. Apparently the locals can eat it twice a day, seven days a week – to me, whilst tasty it was so heavy and starchy my stomach ached.

While the guide and driver licked their plates clean I left half and sipped on tea and watched people going by. The local Tajiks were certainly ethnically different from those in the neighbouring Stans – far more Persian than Mongol, with women dressed in brightly coloured traditional clothes and mean wearing Western suits. Despite being an Islamic nation most drank beer or wine, no women wore any form of veil and men are forbidden to grow beards – I was later to learn that this is due to the Presidents paranoia about a radical Islamic insurgence.
After lunch we visited the National Museum of Antiquities which houses the countries largest collection of stone age to modern artefacts – including what was claimed to be the world’s largest ceramic reclining Buddha…having seen a fair few Buddhas in my time I’d have begged to differ.

From the Museum we headed 30km outside the city to the ruins of the Hissar or Hisor Fort. On the way we passed more ‘gifts to the people’ – another random sports stadium in the middle of agricultural land and a giant empty ugly tea house in the shape of a watermelon. 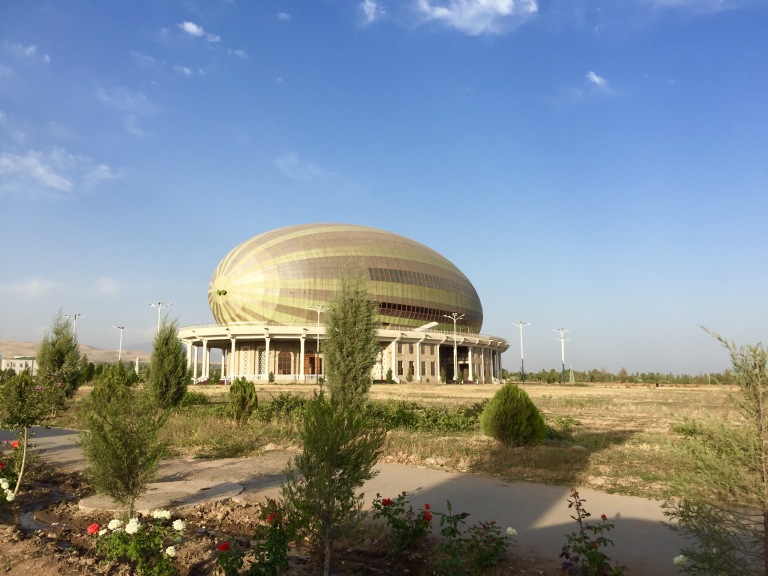 The tea house was apparently built recently to commentate the ‘day of the melon’ at the end of August each year when it hosts an exhibition of melons from all across country, with the winning farmers getting special government ‘grants’. It seemed obvious for the rest of the time it sits empty.

The Hissar Fort was the first meaningful piece of history we’d visited – although much of it was a rather feeble modern reconstruction. The significant fortification extended to several large courtyard buildings in the valley including a mosque and above them on the hillside an imposing wall and military barracks.

The whole Fort was in the process of being locked down by the Police for the visit of a local government official so we were soon hurried out. As we drove back into the city the Police were busy closing the roads. This apparently is a daily occurrence with traffic police closing the roads at the end of the work day to control traffic for government ministers as they go home. I wonder if that would work in London?

With a long day done I was dropped off at my hotel and headed to bed – the next day would be a mammoth drive through the countryside.